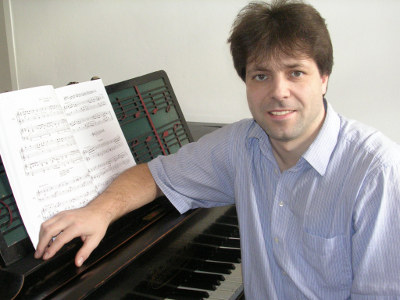 A double M.A. graduate Marek Valášek, Ph.D. was born in 1969. He graduated from the Music Faculty of the Academy of Performing Arts in conducting. At the Faculty of Education of Charles University in Prague he specialized in music education and choral conducting. At the Týn School in Prague he studied church choir direction. During his studies he started conducting in the Municipal Theatre in Ústí nad Labem and between 2002 and 2006 he also worked as a choirmaster at the Prague State Opera where, in addition to his regular choirmaster job, he conducted Leoncavallo’s opera La Bohéme. Since autumn 2015, he returned to the choirmaster’s position at the State Opera again.

At the Young Stage Festival 2002, he was awarded the 1st prize in the conductors’ competition for the concert with the Prague Chamber Philharmonic Orchestra. Within the frame of the Prague Spring music festival 2005, he carried out the Czech premiere of the full-length oratorio Ecce Homo by Jan Hanuš; in November 2005 he recorded Hanuš’s 1st symphony with the Czech Radio Symphonic Orchestra. In 2006, he was a guest conductor in Vilnius, Lithuania, and in Kyoto, Japan. He regularly works with the Philharmonic Orchestra of Hradec Králové and is often invited to lead choirmastering courses and to chair choral competition juries. In 2013, he was awarded the prestigious Ferdinand Vach professional prize by the Czech Music Foundation and the Association of Choral Conductors of the Music Scholars and Performers Association.

Marek Valášek is the principal organist of the Capuchin order in Hradčany, Prague; he teaches at the Prague Conservatory (department of music theory) and also conducts all the conservatory choirs. Since 2002, he has been teaching at the Department of Music Education of the Charles University in Prague and he has worked as the head of the Choral conducting Department since 2011.